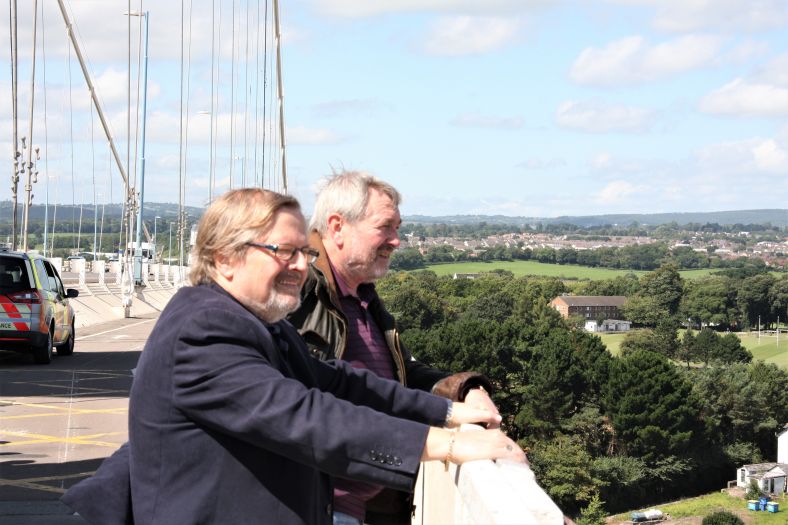 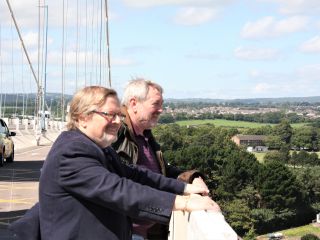 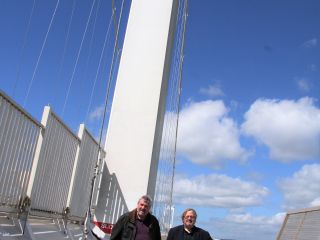 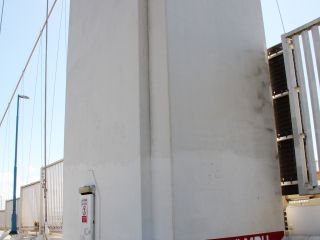 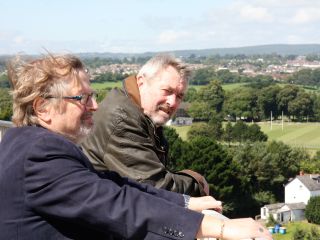 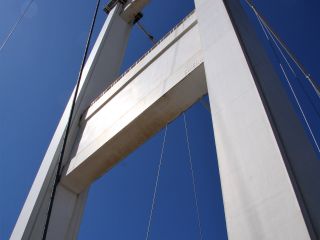 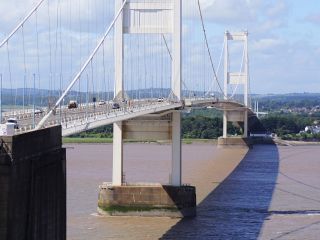 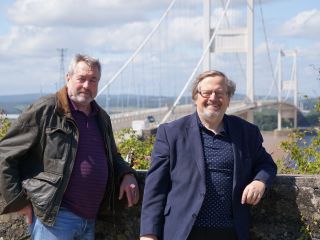 And what a story this is!

In 2017 we are looking back at some landmark achievements within the 150-year history of Stannah and this one cannot be overlooked for sheer engineering skill and the determination of two young engineers.

Graham Clarke and Peter Edler were the Stannah project engineers and it’s fair to say that telling their story and revisiting their work has brought back happy memories and great pride in an astonishing and somewhat challenging job.

Back to the beginning…

The building of the Severn Road Bridge – from England to Wales - was completed and the bridge officially opened by Her Majesty Queen Elizabeth II on the 8th September, 1966.

The bridge was designed in 1955 by Sir Gilbert Roberts and William Brown, British civil engineers from Freeman Fox & Partners, who also designed the Forth road bridge. The pair pioneered new design and construction methods in a series of major bridges that resulted in lighter construction and improved stability while reducing costs compared to previous bridge structures. In 1824 Thomas Telford had proposed a bridge so it took more than one hundred and forty years for the bridge to become a reality.

The engineers were Mott Hay & Anderson and the building contractors were Associated Bridge Builders. Today the bridge is operated by Severn River Crossing plc with Laing O’Rourke as Maitenance Contractor. The bridge took five years to build at a cost of £8 million.

The whole span is actually made up of four separate bridges. The first (coming from Wales to England) is a cable stay bridge across the River Wye, next is the Beachley Viaduct which crosses the small peninsula (actually in England). The third and largest section is the suspension bridge which crosses the Severn itself and is almost one mile wide. Lastly, the Aust Viaduct carries the roadway from the suspension bridge to the top of Aust cliff on the English side.

The nation could not wait to use the new bridge and were all too happy to pay a toll that would recover some of the costs of this extraordinary piece of beautiful engineering.

The Severn Bridge crossing was strengthened and resurfaced in the late 1980s as the volume and weight of the daily traffic grew. The work included the strengthening of the Severn Bridge towers and deck, an extension to the existing Wye Bridge towers and the replacement of the original single stays with two stays. The open structure of the new stays was designed to facilitate maintenance. Most of the strengthening work was inside the deck box and towers and so is not visible. The surfacing is a 35 mm (1 3⁄8 in) thick layer of mastic asphalt over an acrylic waterproofing membrane.

As part of construction work to strengthen the bridge, it was proposed to install lifts in the four towers.

In 1988 Stannah Special Lifts (based in Newport Street, London) won the contract, with a total value of £360,000, to install 2 of the lifts in the towers on the upstream side of the bridge.

Graham Clarke and Peter Edler were the Stannah project engineers, Paul Burrows, Senior Engineer, assisted in the completion of the second half of the lift installation works.

Graham Clarke says: ‘This was an engineering challenge that went to plan. The weather was kind, the team were focused and this project was probably the most exciting lift installation I have ever worked on. We completed both lifts in an amazing 13 weeks on site, with months of offsite work in preparation.’

Peter Edler adds: ‘We are very proud to have completed this project during our days with Stannah. It has been a pleasure recalling our memories of a very special engineering challenge that remains in service today. It is definitely a (excuse the pun) high point in our engineering careers.’

The new lifts were for maintenance access which was previously done by a series of Jacob ladders to internal platforms at intervals inside the towers.

Duration: An amazing 13 weeks on site with offsite preparation for months beforehand.

Finished lift: travels precisely 445ft with 50mm to spare. It has 8 stops, one for each maintenance platform.

All the steel work for the lift structure: made by Cyril Purkiss, subcontractor to Stannah Special Projects

Before the lift installation could begin, major works were carried out on the bridge towers to strengthen the structures. Each tower had 4 tubes of steel, 18 inches in diameter, installed in the four corners of the tower structure. Each tube was passed through the deck access door, the sections then welded together, thereby reducing the internal space left for the lift even more and increasing the engineering challenge.

The lift structure had to be installed within the remaining space and would be completely independent of the towers, not attached at any point.

The tower moved in an elliptical pattern with the bridge, due to the exposure to the heat of the sun, extremely cold temperatures and high winds, so the lift needed to allow for movement too. Linear bearings were installed at each level with plastic and steel blocks that slid with the movement.

The single entrance steel deck access door through which the lifts (and the steel tubes for strengthening) had to be installed is just 600 x 1800mm. The door is the only entrance to the interior of a main tower and is positioned on the bridge deck level, at about 100ft (or a third of the total height) above the pier top.

With the building contractors still on site, conditions were challenging. However the weather, in this location renowned for high winds and extremes in temperature, was excellent throughout.

The lift structure was built in 16ft long modules, in order to slot the sections through the single doorway and assembled gradually to complete the whole structure.

First to be installed was the pit steelwork including buffers, compensating sheave and safety gear pulley. followed by the 25mm diameter ropes (2-off) for the climbing jack. The erector frame was installed at deck level ready to enable the installation of the lift tower sections complete with guides,guide brackets, trunking and door frames for access on each maintenance level.

Next the bottom 1/3 of the structure was built section by section and lowered down the tower until they reached the pier top. Once this 1/3 was complete the top 2/3 (below the top section with winding gear etc) was installed. Each section was attached to the already installed top section and then hoisted by the jacking system upwards, ready for the next section. This process was repeated until the structure was complete and then the top 2/3 was bolted to the bottom 1/3 section to complete the lift tower.

During the assembly of the middle section of the lift structure the lift car and counterweight were installed and then roped.

The hydraulic jacks from PSE were Stannah’s secret weapon for meeting their timeframe and made the job so much quicker and easier, as each section was built at entry level then jacked up the shaft to leave space for the following section.

To complicate the job, the tower tapered towards the top so the sections became tighter and tighter as they climbed the structure.

The ropes for the climbing jacks were made up of 6 x ¼ inch solid steel bars wound together. They didn’t bend easily so the spool they sat on was 2 metres across and a terrific weight too.

Compared to the cables that suspended the bridge they seemed very small indeed. The bridge cables were made up of 8,360 wires and weighed 90,000 tons.

Graham and Paul Burrows share an anecdote from the project:

‘There was one occasion when the weather conditions turned and the result could have been very serious. We had completed the installation and travelled up in the lift car to carry out final adjustments. The wind had whipped up and the external pressure exerted on the outside of the tower prevented the exit door from opening. We were trapped – and it could have been for some time. Luckily we had equipment with us that enabled us to force the door and escape. A lesson learnt by us but very useful for the bridge maintenance engineers using the lift!’

From that day on …

Post installation – Stannah were asked to quote by Avon County Council for the remaining two lifts in downstream towers.

Having the experience and challenges of installing the first two the quote increased significantly. Another company won the contract and took more than a year to install.

The lifts are used daily for structural inspections and are all serviced by the South West England and South Wales service branch of Stannah Lift Services, based in Bristol. Stannah has had the service contract for almost 30 years.

Dan White, Branch Manager, comments: ‘It’s fascinating to hear first-hand about the incredible challenges of installing lifts into the towers on the Severn Bridge. Sometimes the weather conditions prove challenging for servicing these lifts, so the challenges Graham and Peter faced must have been truly amazing.

It’s a privilege to keep these lifts in good working order, all four of them, and now I’ve heard their installation story my thoughts will go back to the Stannah special lifts team and their sheer determination to do a fantastic job!’

On a beautiful summer’s day in 2017 Graham and Peter returned to the Severn Bridge to reminisce about thirteen weeks in 1988 that they will never forget. Looking at the tiny access door in the towering structure they could hardly believe it had been almost 30 years since they had walked on the bridge and admired the view.

They didn’t need to say a word, the pride showed in their faces.